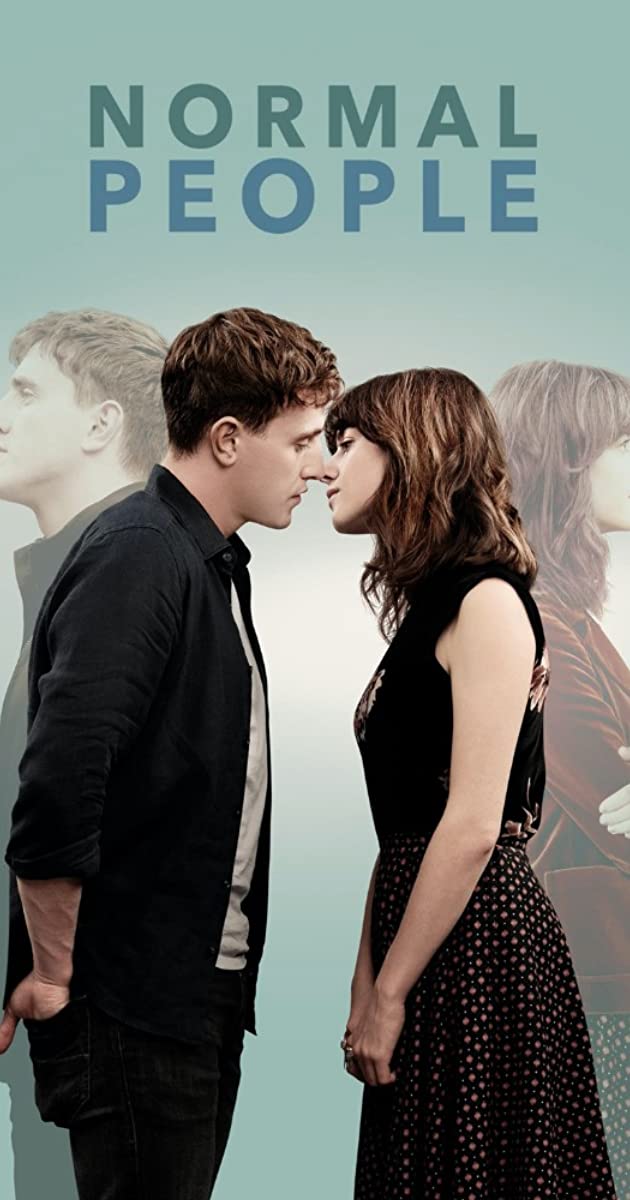 Adapted from Sally Rooney’s 2018 homonymous book, Normal People is a 2020 TV miniseries produced by BBC and Hulu. In twelve half-an-hour episodes, it tells the story of Connell and Marianne’s relationship through the years. Connell (Paul Mescal) is the popular high school jock with a bookish side, while Marianne (Daisy Edgar-Jones) is the bullied intelligent rich girl at the bottom of the social hierarchy. Despite their differences, when the two strike up a conversation one afternoon when Connell goes to pick up his mom at work (she’s a cleaner at Marianne’s family’s home), sparks fly.

The book is marked by its sparse prose, beautifully constructed characters, and a certain lack of structure to the plot, as Rooney chooses to focus on how the characters develop and their dynamic changes over time, rather than on specific events to move the story along. The emphasis on Marianne and Connell’s inner lives and lack of concrete action could have been difficult to translate to the screen, particularly without the addition of voice-over narration. Communication problems are also one of the recurring themes of the book. Though the reader has access to Connell and Marianne’s thoughts in the book, in a TV series those could be problematic to convey to the viewer in a non-verbal manner. If correctly done, however, the viewing experience would be an even closer approximation to the real-life process of getting to know another person and permitting vulnerability to show, for the spectator is trying to decipher what is going on in the character’s head as much as they would in a real situation.

It is through their use of shallow depth focus, close shots, blocking and lighting that directors Lenny Abrahamson and Hettie Macdonald successfully portray the intimacy and intensity of the characters’ lives and dynamics. A good example of that is in a scene from episode 10 when Connell and Marianne reunite for the first time in months at the funeral of a school friend. It is stunning how much is said with so little words. In fact, the only line of dialogue in this excerpt constitutes of Connell calling Marianne’s name once.  I will analyze three stills from that scene, exploring how mise-en-scène elements are used to convey the characters’ internal lives and relationship dynamics and argue that it mirrors, in a condensed form, Connell’s character arc throughout the whole show.

In this first still, Connell is the focus and center of the frame – it is a close-up shot, with the camera level with his face. The church location is only suggested by the blurred stained-glass window in the background. All of this reveals that the central aspect of this story is an emotional one. The viewer is invited to embark on a journey through the character’s inner lives. The choice of a previously unknown actor to play Connell also reinforces this idea. There are no set expectations, and the viewer needs to pay closer attention to his expressions in order to get to know him. It is also worth noticing that we can see many out of focus people in the background, and Helen, Connell’s girlfriend, is beside him, but almost entirely cut out of frame, showing that even surrounded by people, Connell is still alone. There is a sense of disconnection, augmented by his vacant eyes and sad expression. His dark suit imparts the seriousness of the character and situation, while his white shirt communicates his goodness. The lighting of the scene is soft, creating a delicate impression. Yet, the slightly stronger lighting on the right side of the image reveals that good things will come for the character.

Here we can see Connell and Marianne hugging. She dominates the left side of the screen, while he remains the sole center and focus of the image. We do not see her face, as his emotional response continues to be the core aspect of the still. Connell’s expression is drastically different than in the first still, showing an intense mixture of love, comfort, and relief – the closed eyes and slight smile makes it look like he is taking a calming, much-needed breath. Marianne’s hair partially hides Connell’s face and the shadows are deeper, making his expression harder to read. The lighting (coming from the right side again), however, is contrastingly brighter, touching more of Connell’s face and Marianne’s hair, as well. Besides hinting that good is still to come for each of them, it symbolizes that they bring light to each other’s life. Finally, it is worth commenting on two more aspects of the mise-en-scène: firstly, we should notice that there are no other people in the background, which, combined with the shallow depth of field, shows that when Connell and Marianne are together, the rest of the world disappears; and secondly, the position of their arms and hands, which grab at one another’s neck in a fervent but subtle display of their need for physical affection, a mark of their relationship.

Concerning the creation of intimacy through physical displays of affection, Normal People but also counted with the help of intimacy coordinator Ita O’Brien. In the post-#MeToo era, directors felt it was important to have her on set to support the production, ensuring that everyone felt safe, especially as sex and power dynamics are so fundamental to the plot. She made sure that every touch was consensual and rehearsed, creating a healthy and comfortable atmosphere on set, which encouraged Mescal and Edgar-Jones to feel relaxed in their work. This furthered their confidence and familiarity with one another, resulting in a better final project. Connell and Marianne’s vulnerability, affection and understanding of each other shone clearer on the screen for Paul and Daisy felt secure on set. The obvious, palpable chemistry between them contributed too, of course.

This third still shows Helen coming into the scene, breaking Connell and Marianne apart. Connell and Marianne are in the foreground and occupy the majority of the frame but are out of focus. The focus here is on Helen, whose eyes lay on Connell and who remains slightly cropped out of frame. Her fingers dig into his arm as she pulls him back. This difference in focus puts Helen in a distanced position from Connell and Marianne, emphasizing that the latter two share a connection that Helen’s not a part of. Connell and Marianne’s position has marginally changed from the previous still: his head is not resting on her shoulder anymore and his hand is splayed out on her back, instead of holding her to him, showing that he is backing out of the embrace. Their arms remain in the same position, though, revealing their reluctance to let go. Allegorically, it is a mirror image of the ending of the series, when Connell and Marianne are happy together until external factors force them to part. As on the previous stills, lighting illuminates the characters from the right side, a good omen. Even Helen has the right side of her face illuminated, which informs us that despite being the cause of their separation, she brings positive outcomes to Connell’s life (similarly to his New York writing MFA opportunity in the end).

Simply put, Normal People is about Connell and Marianne’s relationship. Without recurring to a narrator, it could be problematic to translate the delicate intimacy between them and the full extent of their feelings. But this is successfully done by Abrahamson and Macdonald through the use of shallow depth of field, close-up shots, and soft lighting we encounter throughout the series, as shown in the previous analysis. The inward experiences and thoughts of the characters are rendered to the viewer without resorting to words, mimicking the real-life process of getting to know someone, and being seen by them.

Additionally, the stills analyzed are particularly relevant for how they portray, in a condensed form, the whole of Connell’s character arc. Firstly, we see him surrounded by people, but still alone – similarly to what we witness in the first episodes when he was popular in school, but not understood by his friends. Then, we see the connection he shares (only) with Marianne, the deep affection they have for one another, and the closeness of their relationship. Finally, we see that, despite their strong bond, external factors force them apart, but their unwillingness to let go makes us hope they will remain a part of each other’s lives. The open ending makes Normal People even more special, for each viewer gets to decide what they think happens next.